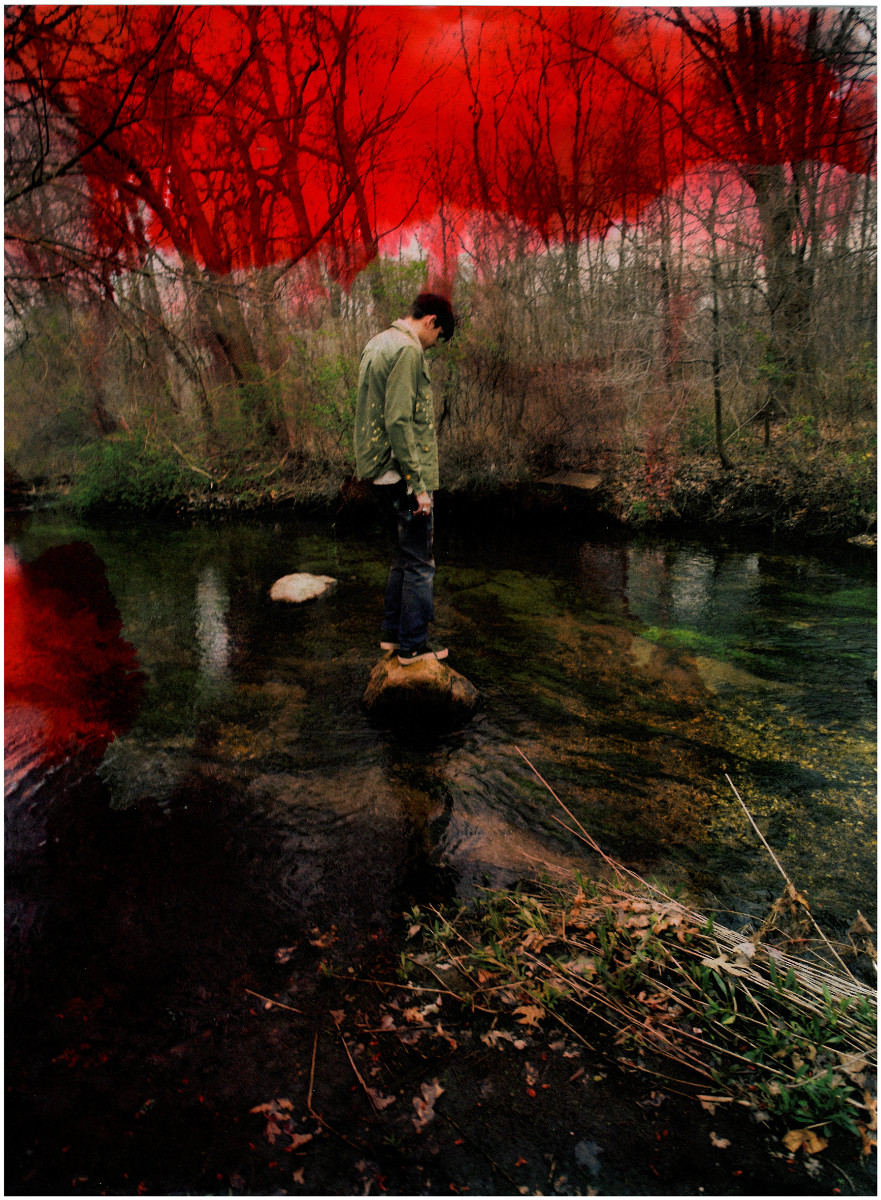 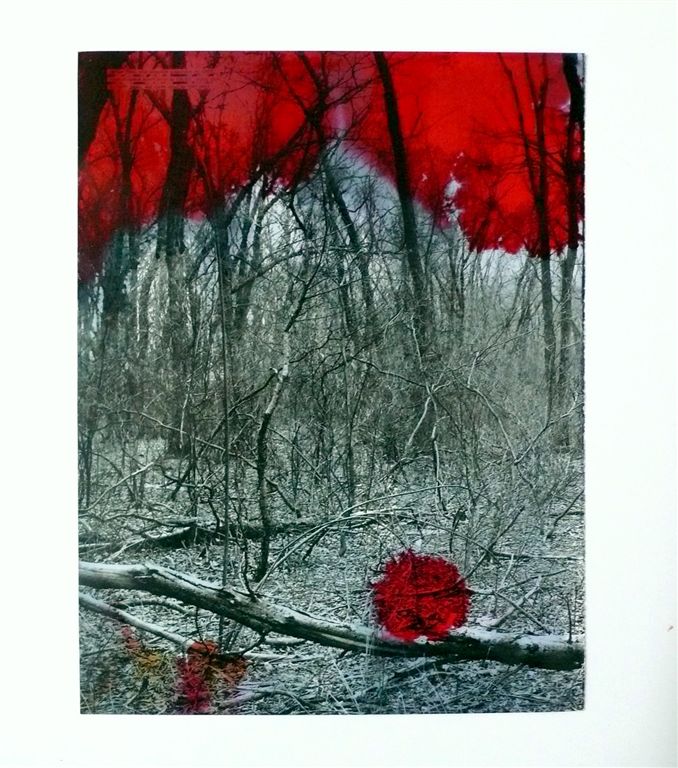 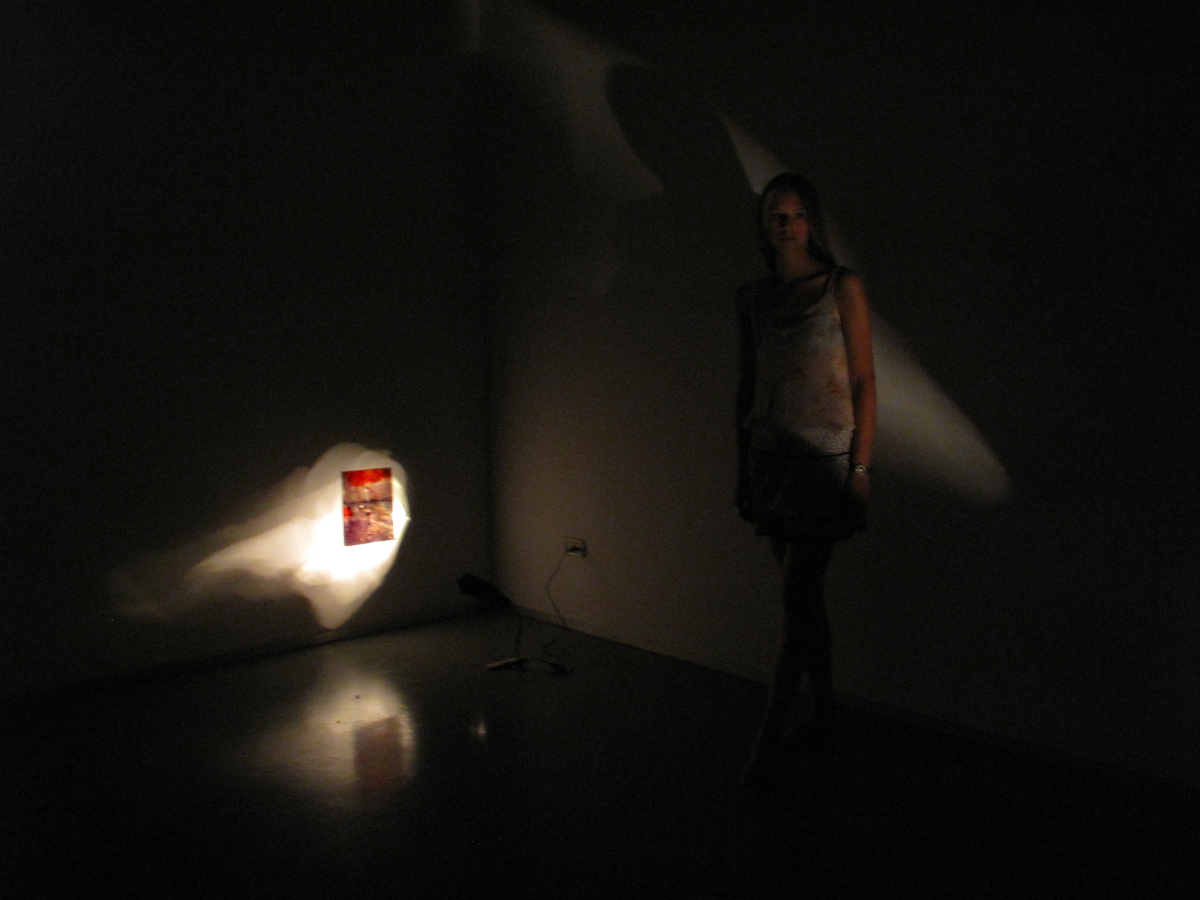 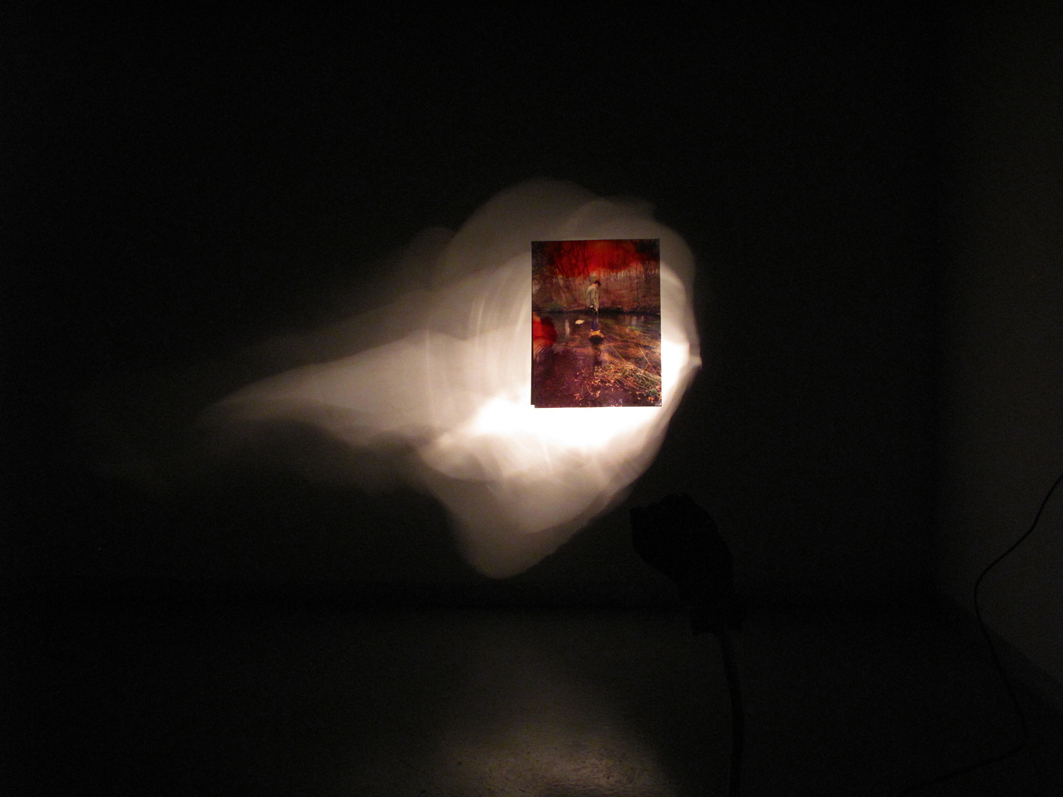 A Wonderland for Emotions

Occasionally the Garçonnière stray happily from the straight and narrow and post something special in their characteristic mannerly spirit. Namely, a piece they were asked to write on the exhibition of their dear friend, the very talented artist Arik Miranda (and not for the first time, they now recall).

Miranda’s exhibition Summer opens tomorrow at Gallery 39 in Tel Aviv, and everyone is of course invited to come along.

A young Narcissus, dressed in jeans, sneakers and a stained khaki jacket over a white shirt, gazes into the river at his feet seeking his reflection, which is invisible both to him and to us. The color palette is washed – from the deep green of the water plants to the sky, which Miranda stained in mesmerizing red liquid. Ophelia’s child seems to have emerged from the outskirts of London and is spellbound by the threat presented by nature (or by his invisible reflection), like a sculpture hovering over the water.

Miranda distorts the clean and polished images that fill the world of magazines from which his work departs: if the seasons of the year are nature’s timepiece, he interferes with the progression of time. In praise of the slow, Miranda describes the youth’s stoic calmness before undoing it and turning the world into something threatening, disturbing and alluring. The red that appears on the summertime image (scorched, dry nature) like a brushstroke on the page is the youth’s (or the artist’s) desire for his reflection, for blood that will let in color and awaken the world from its destruction.

Like in the large triptych by Gilbert and George The Paintings, with Us in the Nature (1971), the work is a memory of something else. Gilbert and George consider the paintings that make up the triptych recollections of summer spent in the British countryside (they called themselves “sculptures” and claimed that the real sculpture is the summer they passed in that landscape). Miranda uses his readymade image – a magazine double-spread – as a memory of something else: a print that yearns for matter and perhaps also for some blood. Like a painting that longs for its originating photograph, which in turn longs for life itself.

Nature for Miranda is a wonderland for the emotions. Music is heard on the descend to the gallery’s ground floor. It is joined by an image of the scathing memory of bustling nature and the dull pain of disappointment otherwise known as young love; romantic and terrifying, evoking yearnings and memories, but also pain. As with Gilbert and George, Miranda adds an elusive text that heightens the tension forming between the boy and nature, between the gaze at the water seeking the reflection and the desire to escape the world.

Yet unlike the work by Gilbert and George, Miranda’s is small and confined to the size of the magazine double-spread, now framed and mummified, as if the artist is declaring his overcoming of nature while remaining in tears.

This is not the first of Miranda’s works that uses the art of the magazine to deal with the loved and endangered medium of print, like an elegant Oedipal act. This is a nostalgic yearning to the world of magazines that captured contemporary culture – from Andy Warhol’s Interview through British 90s magazines Dazed and iD, to the prestigious magazines of today. In this case, Miranda’s work is a late reflection, a hesitant urge to defile the sacristy of print, to break the printed spiritual father that was so influential on the generation it effected. Yet it is also homage to matter, to the smell of print and to the realness of magazines that was lost in the digital age and is now summoned back through its staining; through the artistic act that gets its blood flowing. It is time to repay magazines: to show compassion to print, to embrace it with warmth, to praise its glory.

It is from the same cultural habitat that Miranda draws the effective soundtrack with which he envelopes his works. Here the track is Stranger in Paradise by St. Etienne, in which a person turns to nature: “But open your angel’s arms, to this stranger in paradise, and tell him that he need be a stranger no more.”

And here the youth hovers innocently over the rapid, turning each heartbreak into a crying game, each little wave into a foamy bubble on the water while we remain forever strangers in paradise; whether in the fine suits of Gilbert and George, or in jeans and sneakers.